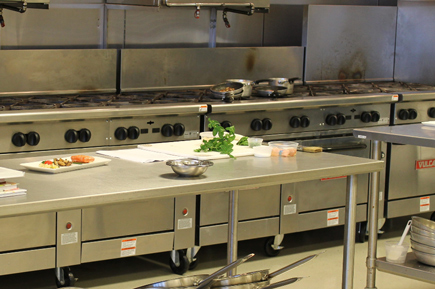 Bacteria, fungi, and viruses are in your restaurant kitchen right now. They are unavoidable.

And you know what?

They are multiplying much faster than you might think.

In fact, bacteria can multiply over 16 million times in just eight hours. And as Rutvik Oza puts it:

“Happiness and bacteria have one thing in common; they multiply by dividing!”

You probably have at one time or another become sick after eating some food. This is what is known as food poisoning or foodborne illnesses.

Bacteria are the primary sources of foodborne illnesses, and its symptoms include:

Any of these symptoms can prevent your patrons from coming back to your restaurant.

This is why, at Alsco, we recommend you always maintain a clean restaurant kitchen.

The health of your staff and customers should always be your priority.

Here are the seven harmful bacteria lurking in your kitchen.

Salmonella is a type of bacteria that mostly causes food-related illnesses, such as typhoid fever and gastroenteritis.

Most of the deaths related to salmonella infection affect the young, the very old, and people with weak immune systems.

These bacteria live in the intestines, faeces, and bowel of human beings and animals.

How Salmonella Spreads In the Kitchen

Some sources of salmonella in the kitchen include:

The bacterium gets into other foods in the kitchen through cross-contamination. This can be through hands, utensils and kitchen equipment.

Campylobacter is a spiral-shaped bacteria that is found in animals, like dogs, cattle, cats, poultry. It’s an infection of the gut (digestive tract).

About half of all reported bacteria-related gastrointestinal infections are due to campylobacter infection. Each year about 33 million people die from these bacteria throughout the world.

How Campylobacter Spreads In the Kitchen

Person-to-person spread occurs when people get in contact with microscopic amounts of an ill person’s faeces. These kinds of spread happen when people touch contaminated surfaces.

How Staphylococcus Aureus Spreads in the Kitchen

Escherichia Coli is a gram-negative bacteria. It’s rod-shaped and commonly found in the lower intestine of both humans and animals.

Although this bacteria is mostly harmless, some people are at a greater risk of having complications. These categories of people include:

How E. Coli Spreads in the Kitchen

Since this bacterium lives in the intestine of animals like goats, cattle and sheep, it can be passed directly from meat or milk. Therefore, E. coli can be spread through:

How to Stop the Spread of E. Coli in Your Restaurant’s Kitchen

Listeria infection is a serious foodborne bacterial illness that is commonly caused by consumption of improperly processed deli meat or unpasteurized milk.

About 1,600 people suffer from listeria infection every year. Just like E.coli, the infection usually affects:

How Listeria Spreads in the Kitchen

Sources of Listeria in the kitchen include:

Whenever people inject any of these contaminated foods, they spread the bacteria.

How to Stop Listeria Spreading in Your Restaurant’s Kitchen

Clostridium botulinum is a bacterium that produces botulinum toxins in low oxygen conditions. These toxins cause muscular paralysis and respiratory problems because they block nerve functions.

Botulinum toxins are some of the most life-threatening substances.

How Clostridium Botulinum Spreads in the Kitchen

In the kitchen, this bacteria can be spread through poor handling of:

C. perfringens is a spore-forming anaerobic bacteria that commonly resides in newborns and adults. The ingestion of contaminated food causes C. perfringens.

How Clostridium Perfringens Spreads in the Kitchen

Temperature abuse is the leading cause of transmission of these bacteria. This is the reason slow cooling of cooked foods before serving customers has been associated with its outbreaks.

What Is The Solution to These Harmful Bacteria?

Poor hygiene and cleaning practices can cause food contamination and the speed of infection in your restaurant.

But there are a few steps your staff can follow to ensure your restaurant kitchen is bacteria-free. Some of these steps include:

However, most restaurant employees don’t follow some of these steps. This is why you need regular Alsco hygiene services to get rid of bacteria from your kitchen.

It’s worth noting that your restaurant hygiene has a direct impact on the morale and health of your employees.