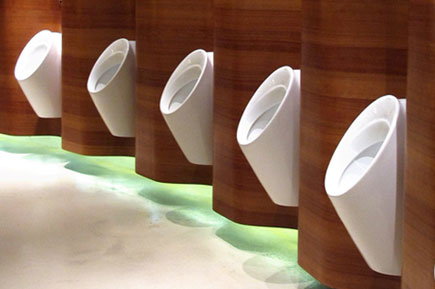 Urine odour can be a nightmare in broad daylight.

No matter what you try, it just doesn’t seem to go away. Or it lets you think it’s dissipated, only for it to creep back into what you thought was a fresh and clean washroom.

And the bigger your business is, the more complex it gets, given the number of people who use the washrooms each day.

The truth is, urine odour doesn’t have to be a permanent headache, but only if you know what it takes to deal with it effectively.

By putting the following steps into action, you can guarantee round-the-clock fresh and clean washrooms.

1. Understand the Cause of Urine Odour

With frequent toilet, use comes build-up in the piping.

This is attributed to the composition of urine, which is made primarily of water, urea and uric acid.

Uric acid forms crystals which accumulate in urinal drains over time. Subsequently, bacteria activity in the pipes results in the release of odour.

How does this happen?

When urine goes stale, bacteria convert it into ammonia, which gives off the pungent smell that often characterises washrooms.

If your urinals are the regular flushing kind, then the water they use is largely to blame for odour. Why? Water accelerates the process in which odour is formed.

That’s because water is vital for sustaining bacteria, which are living organisms, after all.

Every time the urinals are flushed, bacteria rely on the moisture for two reasons:

As a result, using regular aerosol sprays may serve only as a temporary solution. They can only cover odour rather than address its root cause.

2. Prepare With a Preconditioner

With this knowledge, it’s time to launch your first attack on odour.

The first step is to use a preconditioner.

This is a chemical substance that helps a surface become more receptive to cleaning products. Preconditioners make cleaning agents more adhesive to the urinal wall and thus highly effective.

They achieve this by breaking down urine components.

It takes about 10 minutes after application for the preconditioner to completely dissolve the uric salt crystals which have accumulated over time.

3. Use Disinfectants and Antiseptics

Once you’ve dealt with uric salts, it’s time to shift focus to the bacteria that have made a home in the piping.

This calls for disinfectants and antiseptics, or a combination of both.

Disinfectants are chemical substances which destroy microorganisms such as those present on urinal surfaces.

Antiseptics are substances which slow down or altogether impede the growth and reproduction of microorganisms.

Microorganisms (also called microbes) are the microscopic organisms present all around us. As the name suggests, they aren’t visible to the naked eye.

While many aren’t harmful to humans, there are those that affect our lives negatively by causing illness and giving off repugnant odours.

There are four main kinds of microorganisms:

Despite there being relatively few dangerous bacteria, of the four categories, these microorganisms are the most problematic in terms of causing disease to humans.

It comes as no surprise, then, that they are also the most well-known microbes.

These chemical substances disinfect by getting rid of microorganisms present in the air.

For them to be effective, a sufficient concentration of air disinfectant needs to be sprayed in the air to keep the number of microorganisms in check.

Though non-corrosive, they are flammable and can thus be a fire hazard.

Alcohols are most effective when combined with purified water and can be further enhanced by dodecanoic acid.

So, how do alcohol disinfectants work?

They render proteins in the bacteria cells incapable of performing their function by causing them to clump together.

Disinfectants which contain oxidising agents are able to oxidise the cell membranes of microorganisms.

This leads to a loss of cell structure and ultimately death.

Many disinfectants act against odour-causing bacteria in this way.

Given that chlorine has strong oxidising properties, its compounds frequently feature in the making of oxidising disinfectants.

In fact, even in small amounts, chlorine acts quickly against bacteria, which is why it is commonly used even in purifying drinking water.

As such, you’ll find it in many cleaning solutions for varying settings, from households to commercial spaces.

Phenol, along with substances derived from it, affects bacteria in two ways:

Simply referred to as quats, these compounds are among the most widely-used disinfectants.

This is attributed to their high level of effectiveness. They cause vital substances to step out of the cells in bacteria.

4. Finish Off With an Odour Eliminator

At this point, the urinals should be clean and odourless. But this may not last for long.

As soon as another cycle of usage and flushing starts, a new layer of uric salt crystals begins to form and you may just find yourself right where you started.

Thankfully, there’s odour control for that.

Odour control is the first line of defence in a freshly cleaned washroom.

Unlike typical aerosol sprays, odour control stops bacteria from starting to spread rapidly again through two methods which can be used separately but work better together.

First, auto sanitisers deal with bacteria right at the source by releasing a controlled amount of sanitiser in intervals.

Next, an automatic air freshener periodically releases scents into the atmosphere, keeping the washroom pleasant and inviting.

Throughout the day, you can rest assured that no urine odour is compromising the quality of air in your washrooms.

Maintaining clean, odourless washrooms can be a hectic, lengthy process that requires both dedication and expertise.

There are numerous products on the market with varying degrees of effectiveness. Finding the right ones and combining them to provide the best results may prove painstaking.

For this reason, removing urine odour is best left to the experts.

For over two decades, Alsco New Zealand has consistently delivered a trusted, comprehensive service and provided professional hygiene systems to businesses across the country.

With a range of tried and tested solutions, there’s something that works for you regardless of the nature of your business.

What do Alsco’s Professional Hygiene Systems have to offer?

Remember, maintaining cleanliness and keeping odour at bay is a multi-pronged process. This means it can’t be achieved using a single product or approach.

Professional hygiene systems thus bring together distinct, vital components that work harmoniously to guarantee washrooms remain of the highest standard at all times.

In addition to odour control, Alsco’s other products and services are advantageous in several ways.

An unmatched, thorough cleaning process that:

A cleaning solution that does away with toxic chemicals. In their place, biological treatment uses harmless microbes to eliminate odour-causing bacteria, making it:

No serious business wants any compromise when it comes to the health and hygiene of its visitors and staff.

To find out more about how your business can benefit, simply get a quote that matches your unique needs.