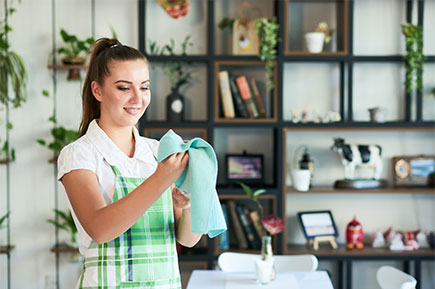 The humble tea towel is no stranger to the kitchen. It is often found near a mess of sorts, dutifully helping to clean up spillages.

But, common as it may seem, when it comes to the tea towel, there is more than meets the eye.

In order to find the best tea towels for your restaurant or cafe, you need to understand these handy kitchen cloths better.

For instance, why are tea towels made of different materials, which of these are the best and why is it better to rent tea towels rather than buy them?

Where Did Tea Towels Come From?

Tea towels have been around for over three hundred years.

When they emerged in 18th century England, tea towels were mostly made of soft, lint-free linen.

Their original purpose was simple: to dry fine china and any other valuable crockery. Despite the simplicity of this task, it was one so special that only the lady of the house could undertake it.

When they weren’t wiping delicate tea sets in the kitchen, tea towels were used at the dining room in the manner from which their name is derived.

A kettle would be wrapped in a tea towel to soak up any drips as tea was being served. In this way, there were no unsightly marks around the kettle, helping to maintain an air of elegance.

And, should tea have been served outdoors, the towels kept cakes and sandwiches free from the touch of meddlesome flies.

Tea towels were also highly regarded in that era as a show of creativity, prowess and skill through one’s embroidery. They were a mark of heritage, with the embroidery techniques often passed down from one generation to the next.

What Are the Best Tea Towels Made Of?

Some tea towels are also made from a combination of these materials.

Ultimately, cotton tea towels are the best, especially those made purely with organic cotton. To understand why let’s examine the properties of each.

Cotton is one of the most widely used materials in making tea towels, and that shouldn’t come as a surprise. Why? Cotton possesses two important qualities:

Cotton can absorb as much liquid as 25 times its weight. Why? We can attribute this to the nature of both cotton and water.

Cotton is largely made up of cellulose which is a carbohydrate.

Water has only three atoms. The two hydrogen atoms in water are slightly positively charged while the oxygen atom is negatively charged. This makes water a dipole.

As a result, cotton molecules easily attract water molecules when they come into contact with each other.

As far as sustainability goes, cotton is the material of choice for tea towels. Because it occurs naturally, it breaks down easily (e.g., when put in composting bins).

Due to its biodegradability, cotton can be recycled. For instance, in the US, Cotton Incorporated turns used denim into household insulation.

While there are many tea towels made of linen, these may not work best for your establishment.

Why is this? Linen has a tendency to tear and rip rather easily, and it will disappoint with its low capacity to absorb.

Because of their fragility, linen tea towels are best used as decorative pieces in domestic settings. They may survive the occasional buffing of worktops but can’t withstand the demanding nature of a restaurant or cafe kitchen.

As the name suggests, microfibre is a fabric comprised of extremely thin strands. For perspective, microfibre strands are thinner than silk whose diameter is a fifth that of human hair.

For the most part, this attribute is advantageous in that microfibre lends itself to a wide range of uses, such as making mops, thanks to its versatility and adaptability.

However, this is also its undoing.

Microfibre tea towels would prove more fragile than cotton ones and thus, less durable in the long term. You would need to frequently replace them which could increase your operational costs.

Keep in mind that microfibre is synthetic and thus non-biodegradable.

If you’re wondering what other options are available, polycotton is also worth trying.

Polycotton is a fabric obtained from a blend of cotton and polyester.

It combines the absorbency of cotton with the strength of polyester for tea towels that are up to the challenge.

How to Make the Most of Your Tea Towels

There are also a couple of creative uses for your restaurant/cafe tea towels:

One thing many restaurants and cafes don’t realise is that not all tea towels are created equal.

It’s easy to think that buying many cheap tea towels is the way to go. However, sooner rather than later, doing this will leave you disappointed and in need of new tea towels.

Why not rent tea towels from Alsco New Zealand?

Alsco’s Tea Towels stand out because they are:

Above all, choosing Alsco means choosing a guaranteed and trusted service.

Over 34,000 businesses across New Zealand use Alsco’s reliable products and services for their reliability, efficiency and cost-effectiveness.

For the best tea towels around, simply get a quick quote tailored to suit your needs.