Home » 4 Types of Waterless Urinals and How They Work

4 Types of Waterless Urinals and How They Work 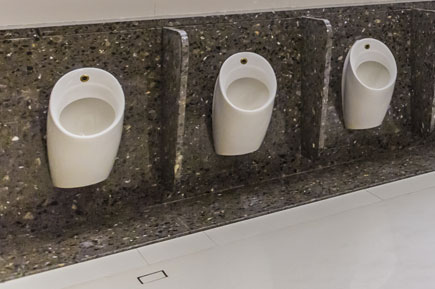 The mere thought of a waterless urinal sounds impossible. Or downright ridiculous to say the very least. And that’s very understandable.

Despite how far-fetched the concept may sound, waterless urinals have been around for more than two decades.

You’re probably wondering, “How is that even remotely possible?” That’s a very valid question, so read on for the intriguing answer.

There’s one thing that comes to mind when most people hear of waterless urinals: “Doesn’t the lack of water pose a sanitary hazard?”

Quite the opposite. Water helps bacteria grow faster.

Because they are living organisms, bacteria require water for food intake and the removal of waste.

These bacteria escalate the process of odour formation. Since urine consists mostly of urea, ammonia forms once it comes into contact with moisture.

So, then, what’s the origin of waterless urinals?

The Waterless Urinal Was Born in Hollywood

You read that right.

And no, it wasn’t a prop for some blockbuster set in the distant future.

James Krug had worked in Hollywood for a good amount of time when he decided to try his hand at something different.

In the ’80s, he’d held a vice president position at Disney and went on to do business with the company in the ’90s.

In 1999, through an acquaintance, Krug had a meeting with Ditmar Gorges at Universal Studios Hilton in Los Angeles.

The German engineer had devised a urinal that didn’t need flushing.

His reasoning was straight forward: Urine is a liquid. All it needs is for gravity to pull it down the drain.

He thus perceived flushing as no more than a waste of water, a resource too scarce and precious for such use.

And Krug concurred with him.

They weren’t the first to come up with waterfree urinals, though.

Nevertheless, Krug and Gorges created what has since become the most widely-used type of waterless urinals.

The invention was a revolution in itself.

Today, there are four different types of waterless urinals to choose from. Read on to learn how the different options function and out-perform traditional water-wasting urinals.

To completely eliminate water from urinals, Gorges figured there needed to be a suitable replacement.

Why? In traditional flushing toilets, water serves a crucial purpose.

It prevents odour from coming up from the drain.

So, he formulated a special liquid that could do the same, contained in a cartridge below the urinal pan.

The liquid sealant relies on the principle of density.

Since the sealant is less dense than urine, the waste liquid goes under it, but odour can’t rise above the sealant layer.

However, liquid sealant cartridges have a limited lifespan.

Depending on the manufacturer, after a given number of uses, they need replacement. Otherwise, odour could become a problem.

Plus, their life cycles aren’t constant. One may last for several thousand cycles while its replacement may go for a few hundred.

To guarantee your washrooms stay fresh and hygienic at all times, try a deep cleaning solution.

It is ideal for both waterless and flushing urinals.

That way, even if you’re unsure of when cartridges need replacement, you’ll be sure that your washrooms remain inviting.

All kinds of toilets and urinals have one issue in common: over time, the inevitable build-up of waste material results in odour.

In certain kinds of waterless urinals, the way around this is a trap that blocks the release of odour, preventing its release into the atmosphere.

How is this achieved, you ask.

Unlike the sealant cartridge affixed to the drain, the urinal pan has an integrated trap built into it.

Due to its nature, an integrated tap waterless urinal needs a good dousing with water every two to four weeks.

Membrane traps use a lining usually made of plastic, rubber or silicone. They work as one-way valves, allowing urine down and preventing the surfacing of odour.

It’s not advisable to clean membrane traps with water, as this reduces their functionality.

After a number of uses, membrane traps in waterless urinals require replacement.

Another way in which urinals work without needing water after every flush is the use of biological treatment.

When you think of the unpleasant build-up in toilets, it’s likely that powerful chemicals come to mind.

It seems they are the only products that have what it takes to fight germs, bacteria and odour.

Most of these contain highly toxic substances. When released into our surroundings, they pose a hazard to human, plant and animal life.

Biological treatment, on the other hand, is environmentally friendly.

It is the perfect alternative to harsh cleaning chemicals, which aren’t kind to the environment.

These consist of components such as:

Their components “feed on” the bad stuff that accumulates in urinals by breaking them down.

While chemicals are a temporary, one-off approach to toilet cleaning, biotreatment has a long-lasting effect.

For instance, bio blocks require replacement and servicing only on a quarterly basis.

And, during that period, you’re guaranteed that they’ll eliminate every last germ.

Another ground-breaking waterless urinal technology is the use of LDPE balls.

Low-density polyethene is a thermoplastic with special characteristics:

Balls made of this material replace traps and cartridges but work in a similar manner.

Given that it has a low density, an LDPE ball allows urine down by floating up when the urinal is in use.

Afterwards, it recedes to the bottom of its unit underneath the urinal pan, blocking odour from rising.

When the inevitable build-up forms, take out the ball, clean it and put it right back.

An LDPE ball can last for a considerable amount of time, making such a waterless urinal easier to maintain.

See? Waterless urinals could be just the thing you need for a sustainable, eco-friendly washroom to meet the dynamic needs of the future.

And, with proper maintenance, they can serve even the busiest of premises, such as stadiums, like the Rose Bowl in the United States.

The 90,000 capacity stadium (15th largest in the world) has been using them for years and saving millions of gallons of water annually.

Ultimately, whichever of the four waterless urinal variants you choose, one thing is certain: They’ll all need cleaning at one point or another.

Get a Comprehensive Cleaning Solution for Your Washroom

The best cleaning solution for you depends on the nature of your workplace.

Thankfully, Alsco NZ has a wide range of products tailored to meet your needs, including:

Washrooms that are superbly cleaned, well-maintained and eco-friendly speak highly of your organisation’s high standards.

If you’d like to find out more about the friendly, timely, effective and efficient service Alsco offers, you can get your quote right now.