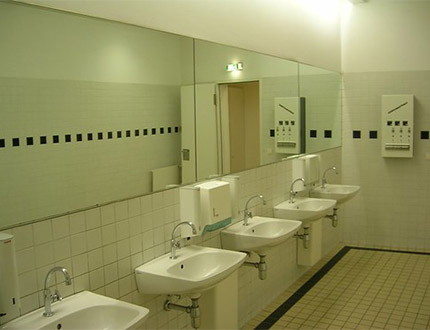 It is the task of a washroom manager to ensure toilets have the required hygiene systems put in place to keep them clean and sanitary.

Did you know that World Toilet Day is celebrated on the 19th day of November each year? It is not clear how people celebrate it, though. Maybe they get themselves a new bottle of Windex? Or a new toilet brush?

However, it’s known why people should celebrate this day. Toilets save lives, like human waste pass killer infections from one person to the other.

This day is meant to inspire action to deal with the worldwide sanitation crisis. The sixth Sustainable Development Goal (SDG) aims to avail a safe toilet to everyone and ensure that no one defecates in the open by 2030.

This article explores 10 shocking and fun toilet statistics that every washroom manager needs to know.

Many people are so worried about catching something nasty from the toilet seat that they overlook other possible turmoils that lurk there. Did you know that:

85% of washroom injuries are sustained by people falling in the toilet with the seat up. (More of a reason to always put the seat down.)

Every year, 7 million cell phones get dropped in the toilet. (It’s said that you can get the affected phone working again by putting it in dry rice, but tossing it in the oven doesn’t work.)

Statistic #2: About a Quarter of the Soap Found in Public Washrooms Is Contaminated

Microbiologists found that some public washrooms’ soaps are contaminated with faecal matter, making them unhygienic to use.

Unsanitary soap dispensers have a lot to do with this problem. How is this possible? When you use open containers to hold your soap, you are exposing it to airborne bacteria. Also, if the dispenser is filled by someone who just cleaned the toilet, they may be spreading harmful bacteria.

Overdiluting the soap mixture is another cause. It makes the soap less resistant to harmful bacteria and viruses that live there.

How do you deal with this problem?

Get the right dispensers for your washrooms, such as these Alsco soap dispensers to keep your soap from getting contaminated. They come in hypoallergenic and antibacterial options.

A study shows that only 30% of men wash their hands properly. As appalling as this might sound, it’s the truth. In research carried out by the American Society for Microbiology in 2007, it found that one-third of men skip washing their hands after visiting the washroom, compared to only 12% of women.

However, this was an improvement from 2005 when only 25% of men washed their hands after using the toilet. The next time you think of shaking your male colleague’s hand in the office, keep this in mind

A washroom manager can change this by sensitising all your employees to practice good hand hygiene using posters in the washrooms.

Statistic #4: It’s Easier to Get Sick from an Elevator Ride than from Public Toilets

The University of Toronto researchers took samples of 96 toilet surfaces and 120 elevator buttons from Several Toronto hospitals to test for bacteria prevalence.

The reason for these findings could be due to the fact that airborne germs move easily in small, poorly-ventilated areas such as elevators. It’s normally difficult to avoid touching other people or breathing when you are in a crowded elevator.

Elevators expose people to a wider range of bacteria as opposed to those you might pick from public toilets. The worst infection you can get from a washroom is a flu virus.

However, all kinds of people use the elevators, and you are likely to catch a more serious infection such as tuberculosis from an infected person. Tuberculosis is transmitted through tiny droplets that an infected person releases into the air through coughs and sneezes.

Statistic #5: In New Zealand, More Men Use Their Phones in the Washrooms

If you opened to any search engine and typed, “How long do men spend in the toilet in a year”, you’ll be surprised by the results. Men spend seven hours in the toilet a year.

That’s not all. In a study carried out by Colmar Brunton among 1000 men, one-third of them admitted they hide in the toilet for peace and quiet. They also go there to avoid the nagging they get from their better halves and children. It was also a great opportunity to look at their mobile phones undisturbed.

In the survey, only 32% of New Zealanders found it repulsive to use their cell phones on the toilet. This shows that more than two-thirds of Kiwis find it OK to socialise online while going about their toilet business.

In the office, the situation was the same. 18% of men use their cellphone in the workplace washrooms compared to only 5% of women.

Toilet paper is meant for use by everyone who has a standard digestive system. They also have secondary uses like removing makeup and wiping surfaces, among others. The size of one sheet of toilet paper is approximately 4.5 inches by 4.5 inches.

An average household uses one roll of toilet paper in five days. For each toilet use, an average consumer uses 8.6 sheets of paper.

This totals to 57 sheets every day and 20,805 sheets every year (21 rolls of one-ply or double the number for two-ply papers).

Statistic #7: People Use More than 10 Litres of Water with Every Flush

Most people flush the toilet automatically without giving it a second thought, but given that the old toilet models in New Zealand use around 12 litres of water per flush, this is something people should put some thought into.

According to various websites like Home Water Works and Dŵr Cymru Cyf, a household uses more water to flush their toilet than anything else. It actually makes up to 30% of indoor water consumption.

Doing regular washroom maintenance will help a big deal in conserving water. Get an approved company to do all the maintenance for you without having to go through all the hassle. Other ways you can save water include practising these toilet water-saving tips:

Research has shown that women stay longer in washrooms than their male counterparts. On average, they spend one year, seven months and 15 days locked in the toilet. This is one month longer than men do.

Statistic #9: About 70% of People Don’t Use Toilet Paper

Around four billion people don’t use toilet paper, translating to between 70% and 75% of the world population not using toilet paper. This is because some people live in parts of the world where there are no trees while others simply can’t afford it.

Some people choose to use their money in better ways rather than spending it on fancy toilet paper to wipe with. Water is considered the universal solvent and not paper.

Toilet paper is also used for other purposes, including removing makeup, cleaning the nose, covering toilet seats, cleaning glasses, as a packaging material and cleaning mirrors, among others.

Statistic #10: Only a Small Percent of People Wash Their Hands for the Recommended Period

According to the U.S. Centres for Disease Control and Prevention (CDC), you should rigorously wash your hands with running water and soap for 15-20 seconds. This is the best way to eliminate harmful germs.

The sad fact is that only 5% of people follow this guideline, meaning 95% of people don’t clean their hands long enough to eliminate harmful germs.

And that’s just the tip of the iceberg! The research also showed that only two people in three use soap while washing their hands. And guess what? Men are the biggest culprits, as they got lower marks than women when it comes to hand hygiene.

All the above facts and statistics point to one thing: You need to invest in good washroom hygiene practices. This all starts with good handwashing habits to avoid spreading germs which can leave you and those around you sick.

If managing your washroom hygiene seems like such a headache, leave everything to a trusted and qualified team. Alsco New Zealand helps businesses maintain clean, sanitary washrooms through their managed services.

We’ll provide you with all the necessary supplies to keep your washrooms clean and sanitary to minimise the spread of germs in your workplace.

Give us a call today for an obligation-free quote according to your business needs.