ARHT on Saving Lives: Just in Time for Medical Emergencies 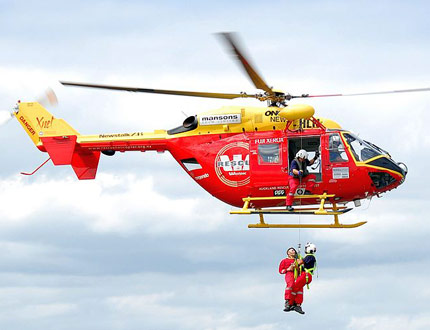 Morning time is when we’re summoning up all the strength we can muster so we can face whichever adversity the day throws at us.

Being accountable for a company’s future or performing any job role responsibly is not all plain sailing. But what if you were responsible for other people’s lives?

The crew of the Auckland Rescue Helicopter Trust lives with this responsibility 24/7, 365 days a year. And they’re doing a great job! ARHT rescue service is an Auckland based emergency aeromedical service.

With over 1000 missions a year, they’re keeping a watchful eye on Aucklanders needing urgent medical attention, a rescue mission or medical transport. And they’re always on the dot when there’s some lifesaving to be done.

The History of ARHT Rescue Services

It was back in 1970 when the Auckland Surf Life Saving Association started the ball rolling. They leased a Hiller 12E helicopter for surf rescues on Auckland’s west coast beaches. Making it the world’s first civilian rescue helicopter service.

These guys were good news to the community, even more so when they were brought on the air. Namely, the helicopter lifeguards started delivering surf reports straight from the chopper to the Radio Hauraki’s live broadcast.

The audience loved the glad tidings the flight crew brought them. So this resulted in successful fundraising which fixed the crew up with a new summer base and a landing pad.

Fast-forward to the present day, the service has thousands of rescue missions behind them.

The best way to taste a little bit of what ARHT does is via looking into the real-life stories of people they’ve helped.

It was a July Friday afternoon when Andy Corles pulled out of the driveway to pick up his 4-year-old after her playdate. The family had just been packing for a holiday, but Andy never returned home that day.

It was raining heavily and Andy slid out of control while rounding a corner. The car hit a pothole, the bank and then flipped onto its roof.

The passersby dialled 111 and the local police and the ambulance crew showed up in no time. But Andy needed ARHT’s quick action. Otherwise, it would have been a three-hour drive by roadway to the nearest hospital.

ARHT flew him to the Auckland City Hospital in just 24 minutes. The Corles family believes Andy wouldn’t have made it without the rescue helicopter crew. The recovery was a long one, but Andy’s come out as tough as nails. His own words would suffice:

“A doctor asked me what I wanted to achieve at the spinal unit. I said I’m going home in a manual wheelchair. He told me it was great to have goals, but to be realistic. Well, I proved him wrong. It took a lot of work, but it was worth it in the end.”

Andy’s taken up hand cycling as he had promised. But not only that. He’s about to compete at Nicholas Browne Challenge and hopes to raise $4,500 for the ARHT while doing it.

What appeared to be a cheerful walk with a mate on Grant Island, Mahurangi, turned out to be a disaster for a 14-year-old Finley Savage. A dreadful fall 15 metres down a cliff face left Finley with multiple head and arm injuries as well as a broken femur.

They had no phone on them so mate Robbie ran to fetch help. While he did so, these were exact Finley’s thoughts.

“I was falling in and out of consciousness when I heard the sound of those rotors. Best sound I’ve ever heard!”

Luckily, he’s fully recovered from the accident. Here’s what he says right off the top of his head to urge everyone to continue helping the chopper.

“After the accident, my mum said how lucky we were that the helicopter was there because we never thought we’d ever need them. If you can help them help others then please do so.”

If They Hadn’t Been Here, Finn Mightn’t Be Here Today

The two boys of the Macleans family share the common children’s restlessness. But sadly, what all four members of the family have in common is the same chronic condition – asthma.

The little three-year-old Finn has developed the condition at just six months of age. But what happened on 24th November 2015 was something they hadn’t seen coming. The boy got ill during the night and at one moment the parents noticed that the boy had gone a bit blue under his bottom lip.

The ambulance arrived within minutes. But it was the peak hour and they couldn’t have risked transporting Finn to the hospital by road. It took ARHT 13 minutes to get the toddler to the hospital.

After winning the battle with Finn’s severe asthma attack with the help of the helicopter, this is what the mum Jade’s reaction was.

“I think that getting Finn there quickly was the big difference between it going well and going south,” Jade says, trying to hold back tears. “It’s really sad to think had they not been here Finn might not be here today. We’re just really, really grateful.”

The stories above testify to the ARHT’s immense value for the Auckland community. Alsco likes to be first in line when it comes to supporting such valuable community-driven organisations.

We’ve been providing financial contributions to ARHT for more than a decade. Moreover, everybody at Alsco can’t stop raving about this worthwhile cause.

It’s vital to know anyone can help with the rescue mission. Being a part of it literally means helping more lives being saved. How can you contribute funds to the helicopter mission?

There are a few different ways. You can:

Another thing you can do is jot down ARHT’s hotline number. It’s good to have it on you in the case of an emergency. You could save it in your phone and share it with your friends and colleagues.

You never know whose luck this number can turn around when things go downhill.