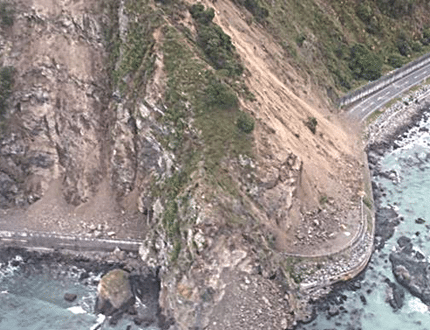 Let’s begin with the understatement of the year:

It was a very shaky start to the 2016/17 tourism season for our Kaikoura customers, their businesses and families.

Just after midnight on the 14th November, the people and businesses of Kaikoura had their worlds turned upside down in just a few minutes.

The November quake and the aftershocks have had a profound effect on this beautiful and tranquil, small, seaside town.

On my first visit back, I couldn’t believe the level of damage and the changes in the landscape from when I was there just two weeks earlier, on Marlborough anniversary day, 31st October.

You can view images on Google (Kaikoura Quake Images)

Here we are a few months after, and I am happy to say that the town is being rebuilt. Access via the inland road and Christchurch has been mainly restored, unlike the access from Blenheim is still many months – if not years away.

Many of Kaikoura’s unique and wonderful attractions have reopened since then and the tourists are once again visiting Kaikoura.

Over the past 3 weeks, the numbers (e.g. Linen Orders) have almost doubled and as of this week, we are now going to Kaikoura 2 times a week.

The Unconditional Helped Given

However, back in mid-November, it was a different scenario that we were facing. With no road access in or out of Kaikoura and random communications with businesses, emergency agencies and customers. All of this was a regular thing until December.

But what we did have in Kaikoura was a Knight in Shining Armour. Well, maybe not a knight nor shining armour, but our local part-time employee Dan Young (in a shiny Van) who was based in Kaikoura and kept us informed about events as they occurred.

It was a very difficult time for all Kaikoura residence and for Dan it was no different. He had his family and was also working on his other part-time job, delivering milk etc.

Dan stayed in touch with all the Bays Laundry customers that he knew were open. He recovered clean linen from accounts which were not able to open, ensuring service continuance for those that were. This was fantastic and we appreciate Dan’s commitment to his customers very much.

Yet, we had a new challenge. There was a significant buildup of soiled linen bags. We had to get this soiled product out of Kaikoura as soon as possible. Looking at the short term, this was fine.

However, in the mid-long term, this could become a health hazard and a significant expense for replaced damaged stock.

We looked at a number of different scenarios to get the soiled linen bags out of Kaikoura, including airfreight. However, with $150 a bag and over 300 soiled bags in Kaikoura, this was way too pricey.

The help came from Peter, an acquaintance of a friend of mine. He was in the boat building industry in Nelson. Peter owned a fishing boat and because of the quake damage in the bay, his boat was available.

Because of the seabed rising 3-4 metres and lack of fuel available, the local fishing industry in the area basically had to shut down just a few weeks after the quake.

Anyway, I got in contact with Peter and we arranged his fishing boat and crew to meet Dan in Kaikoura, where they loaded almost 300 bags of soiled linen onto the boat. They travelled to Picton for about 10-12 hours approximately, to meet up with our Bays Laundry Service Manager Shane Laurence who collected the linen bags.

We then loaded 150 Bags of clean linen back onto the boat to take back to Kaikoura.

For the next few weeks, as road access was improving, we serviced Kaikoura via the inland road. Initially, we had to go online and register to meet the emergency services, who then provided a guided transport convoy in and out of Kaikoura. Most of the service days consisted of departing from Motueka/Nelson at 3 am, returning at approx. 6 pm.

The cost of maintaining services into and out of Kaikoura is probably doubled than those of last year, with less than half the revenue.

However, as a long-term supplier with a commitment to the market, we owe it to our Kaikoura customers to be there and work with them to rebuild local businesses in the region.