Home » The Carpet That Saved the World

The Carpet That Saved the World 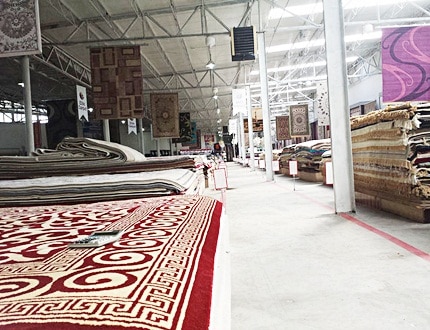 “Sustainability” is a word that gets thrown around a lot. The funny thing is that few people even know what it means.

Even fewer know how to achieve it. Yet, amusingly enough, it took a carpet—or more accurately—a carpet manufacturer to make it a reality.

It all happened in 1994, with a company named Interface owned by one Ray Anderson.

He set a challenge that must have been totally amusing to his employees.

That challenge was to, somehow, show the world that sustainability was a thing you could do. He even specified that it had to involve people, product, place, process, and profits. Sustainability is hard enough to achieve in one aspect, let alone five.

The aim was noble, however. It was a crusade to essentially heal the world by setting the right example and sticking to it consistently.

As one might expect, the descriptively named “Mission Zero” campaign drew inspiration from nature and the steady, calm way it operated. The end goal? Zero emissions, zero waste, and zero oil by 2020—which today is just a short jump ahead in time.

So, how have things been so far? In the decades following their bold, ambitious mission, Interface became the carpet manufacturer which uses completely recycled yarn.

This was in 2011 and the company followed the same path in terms of carbon offsetting. It didn’t stop there. The company went ahead and looked beyond simply the positive effect on their manufacturing, they also envisioned sustainability in the lifespan of their products.

Visible Results of a Brave Fight

Since 1996, a scant two years after the charging of the mission, Interface managed to reduce its “contribution” to area landfills significantly. This resulted in an 84% decrease in total waste. Those aren’t numbers to scoff at given the generally large contribution that manufacturers tend to bank over time.

When 2012 rolled around, Interface managed to have 80% of its factories operating with renewable energy. This, again, is impressive considering the high power demands that this industry generally needs.

Looking across the seas into Europe, things were even more impressive. Primarily, they cut down carbon emissions by a staggering 90%. If that wasn’t enough, they also reduced water consumption by a larger 95%. These amazing achievements happened at their Scherpenzeel facility in the Netherlands.

In line with initial pushes in America, this same location also sourced 100% of its energy needs from renewable sources. That achievement was followed by the declaration that it also produced zero waste for landfills. This represented a very big leap forward, vindicating Andersen’s belief in what his company could do towards completing its mission.

These results were so impressive that, just two years ago, Interface European Sustainability Director Ramon Arratia pointed out that a dream of actual sustainability is achievable given the right effort and drive. After all, carbon reductions and water savings of 90% are not things to be scoffed at.

Equally impressive is that this comes from an industry that’s part of the petrochemical sector—one that is rife with generally environmentally unfriendly practices.

Pushing Innovation into The Green

Innovation is what drove all these amazing changes in just one company—many of which seemed to be big risks at the time. Green gas was the first “risk”. At a much higher cost than regular gas, it came off as an expensive buy.

But the company was looking into the future. Interface banked on the efficiency brought about by this investment and it paid off.

After all, who would have thought that any usable, sustainable gas could result from what is essentially the digestion of fish waste?

Their focus on carbon reduction before anything else allowed them to focus on what matters before benefiting greatly from it.

With the gas taken care of, the next essential component was water. For this, they used closed-loop piping paired with a water recirculation system that kept things in-facility. Little water needed to be shunted in from the outside.

If they can do it while existing in a really tough industry for green initiatives, what’s the excuse for the rest of the world?

At Alsco, we’re all for focusing on eco-friendly solutions. We believe that caring for the world we work in is a big part of true success.

From our Ecosafe Parts Washer down to our Evolution Recycled Rubber Mats, we provide eco-friendly solutions that last.

Give us a call today and we’ll help your company meet its day to day needs without compromising on its environmental commitments and initiatives.