Home » How Defibrillators Save Lives

How Defibrillators Save Lives 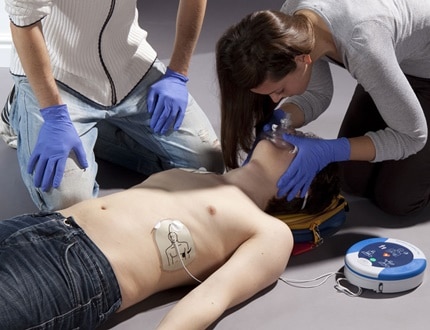 Heart disease is the leading cause of death in many countries. Roughly 6.4% of people above the age of 15 suffer from either heart disease or a stroke each year.

This may not seem as bad as you think, although considering that this statistic is above road incidents and cancer diagnosis’, it’s probably worse than you’d think.

The majority of these cases happen within a business workplace. Whether they are an employee, a visitor, or a customer.

The fact is that due to the amount of time that is spent within a workplace, the risk of going into cardiac arrest while at work is significantly higher than anywhere else.

As low as 20% of cardiac arrests happen inside of a medical facility, with the remaining 80% of cases happening at home, a workplace, or out in public.

Kerry Packer had fallen victim to another cardiac arrest in 1990 and was lucky enough to have been treated effectively by one of the two ambulances which had a defibrillator available within them.

If we take a look back at that time, we can compare it to the current age and day where there are AEDs placed even in public areas so that if a citizen requires the use of one, life could potentially be saved.

With that in mind, a lot of larger businesses have taken this effect into consideration and have invested in AED units throughout their business as a safety precaution.

Why Time is of the Essence in

– In the event of a heart attack, depending on the level of severity, time is vital.
– If someone who has gone into cardiac arrest hasn’t received help within the first 10 minutes, both CPR and defibrillation will be ineffective and unhelpful.
– With the previous point in mind, response times are estimated at over 10 minutes and in some areas, even longer.

However, the fact that AEDs (otherwise known as Automated External Defibrillators) are becoming an essential part of a business’s medical set up is a huge step in the right direction.

A Serious Example of Why AEDs Should Be in Place

The story that follows shows just how critical an AED unit is to save lives, especially in the workplace.

During December of 2011, the HR Advisor (and fortunately the Head Office First Aid Office) of a large business attended a Christmas lunch at one of the company’s branches, along with their National Sales Manager and their Regional General Manager. During the lunch, the HR Advisor had spotted that one of her colleagues seemed to be in distress and therefore went on to approach the colleague to provide the assistance that was necessary.

After questioning the colleague, she discovered that she had not only shortness of breath, but had been feeling pains in her arm along with feeling pressure on her chest, on her neck, and on her face. On top of that, the HR Advisor had found out that her colleague had been prescribed heart medication in the past due to heart problems, but had stopped taking the medication over 6 months prior to that day.

The HR Advisor asked another of her colleagues to instantly call Triple-O and get the AED that was in the workplace. In the meantime, she helped the colleague in distress get herself into a more comfortable position that was closer to the ground.

Fortunately, once Triple-O was contacted they arrived within minutes and were impressed due to the first aid assistance that had been offered by the HR Advisor.

Unfortunately, after the colleague had been taken to the hospital and had undergone bypass surgery, she was unable to return to her workplace due to her ongoing health issues.

Ensure that your workplace has access to high quality and fully-managed Automated External Defibrillators (AED) at all times. You wouldn’t know when you would need one to save lives. Time is very important. Enquire about our high quality, easy-to-use, and reliable portable defibrillators now!